Developed in 2005 by
Mario Rosenau and Mike DeVries.

Professional tattoo artists who knew there had to be a better way to apply detailed, precision stencils and achieve longer lasting tattoo stencil artwork. The Original Tattoo Stencil Solution was then created!

Some homemade solutions worked with some success and were improved upon by experimentation and taken to a whole new level with the help of high caliber laboratories.

Stencil Stuff® is a creamy lotion that has been laboratory formulated and tested to be non-toxic and safe for most skins.

Stencil Stuff® makes the tattoo stencil transfer crisper, cleaner and sharper than using all other traditional methods and eliminates the possibility of cross-contamination.

Stencil Stuff® eliminates the need to bloodline or gray line. It also works exceptionally well if outlining is needed or desired for your tattoo. 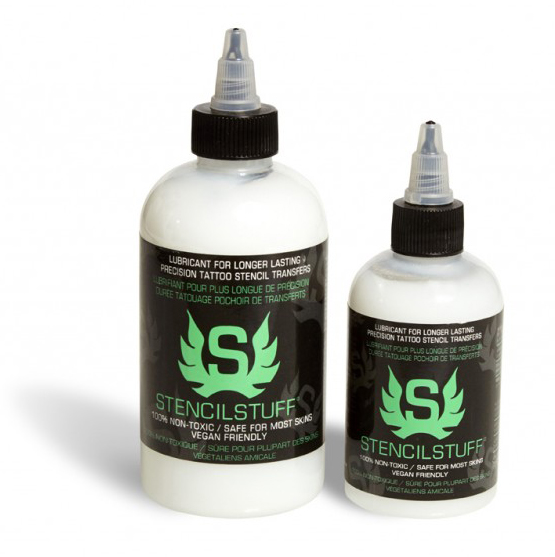 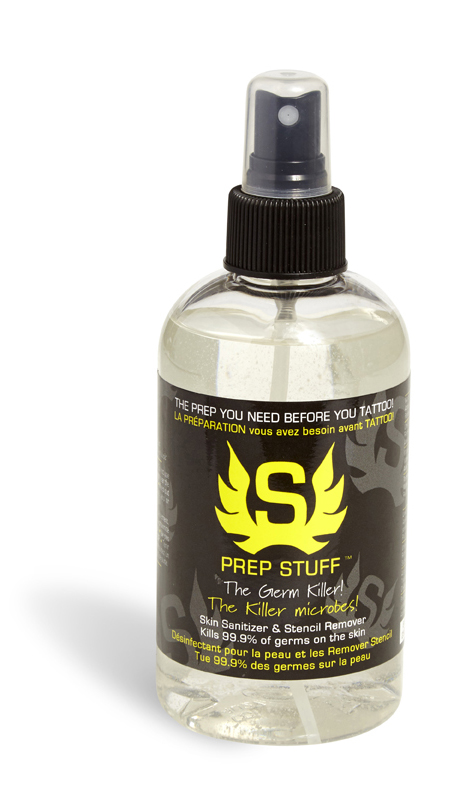 If there is a need to remove the transfer stencil for repositioning, it can be removed with alcohol or Prep Stuff. The original thermal copy stencil can be reapplied several times without the worry of using damaged stencils or having to make another.

Try Stencil Stuff® one time and you”ll wonder how you ever got by without it!
Stencil Stuff® has become a necessity in the tattoo industry, used by thousands of professional tattoo artists everyday. Check out some of their comments on the Testimonial Page.

One 8 oz. (236 ml) Bottle is $20.00 plus S/H and will last approximately 4 – 6 months…only pennies per application. It will cost less to buy one bottle of Stencil Stuff® rather than buying the materials and spending the time making your own stencil transfer creation.

Stencil Stuff® is a product designed for tattoo artists to help apply longer lasting stencils on the skin. It is a non-toxic lotion type gel that you rub on the skin before applying the stencil. Stencil Stuff® keeps that stencil from rubbing off so easily and it does not mess up the stencil if you need to reapply it to get it right. Also, most importantly, it’s a cleaner, safer way to apply tattoo stencils. It is used by thousands of tattoo artists every day. Tricks to using it: Shake the bottle, clean the area properly before applying the stencil, using Prep Stuff™ (Prep Stuff™ could also be used as a stencil remover just incase you want to reposition your tattoo stencil.) After a nice consistent rub down with Stencil Stuff® allow about 5-10 minutes to dry and you are good to go. It’s recommended to apply the stencil before setting up so it allows for some drying time. If it’s a small piece and you are not worried about it staying on for a long time, you could get away with just a few minutes of dry time.

Spray Stuff was developed by the makers of Stencil Stuff. It was designed for tattoo artists that do free-hand drawings on the skin. Spray Stuff contains no harsh chemicals and it is 100% non-toxic & vegan friendly. Spray Stuff is spray that you apply over a marker/pen drawing that you free-hand on the skin. It helps in the longevity of that drawing. There’s nothing worse than losing your free-hand drawing half way through a tattoo. Tricks to using it: Shake before using it after the area has been prepped and drawn on, either with pens or different types of markers, including Sharpie markers.

Spray a light mist about 8 inches away from the area. A lighter mist is better than too much. Let dry for about 10 minutes and you should be good to go. It will definitely buy you more time than not using anything at all. You can even spray a couple of layers if you’re looking for extra hold.

Prep Stuff is our newest tattoo product that is a liquid used to prep the skin before you tattoo to sanitize the area before the tattoo procedure. It helps to reduce bacteria on the skin. For best results rub it in with a gloved hand until dry, then use Stencil Stuff. It works in conjunction with Stencil Stuff and helps the stencil stay even better. “We call it the Germ Killer!” Prep Stuff could also be used as a stencil remover just incase you want to reposition your tattoo stencil. Works great! 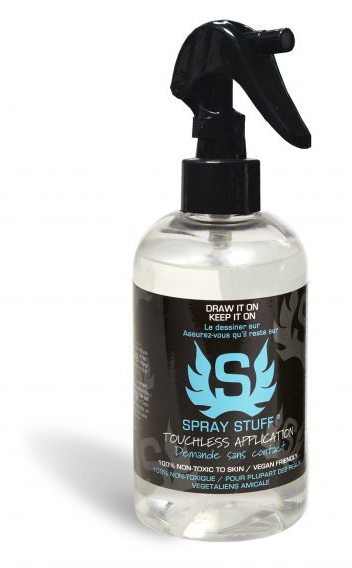